Ok, updates on Tele Management World as they happen. Comments and summary to come later….

Keith Willetts (TM Forum) and Simon Torrance (Telco 2.0) started the day with an overview of what they thought were the key issues faced by service provider in the current economy. 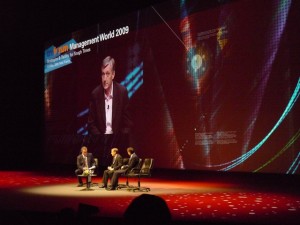 above. Keith Willetts and Simon Torrance with host Tony Campion

New growth should be the driven by extending traditional service to emerging markets, while creating new business models in mature markets. That’s where Simon comes in with the Telco 2.0 initiative. Telco 2.0 promotes a migration to creating an ‘upstream’ market for CSPs: Partnering with B2B and content providers who pay the CSP for delivery of services ‘downstream’ to the end customer.

Telco 2.0 has a high profile here this week: The introduction today was not to TMW alone, but to two conferences: TMW and Telco 2.0. Getting in to bed together makes some sense: Telco 2.0 is the ‘what’, while TMW is the ‘how’, of CSP transformation.

To spice up the speaking sessions a bit, a minority of the lecture theatre chairs have voting devices. The first vote asked whether telcos should focus on cutting costs/churn or creating new business models. An overwhelming 97% voted for new business models. Concerns were raised by Keith and  Simon as to whether the management levels above and below the attendees here bought in to that. Junior management are focused on spending less on paper clips while the CxO level are showing a reluctance to ‘give up on retail’ and offer services to ‘competitive’ upstream content &  service providers.

Sanjiv Ahuja (Augere, ex-Orange) then gave us the CSP’s perspective. His message was very much driven by the idea that voice services will soon have to be free, no longer the main source of telco margins. 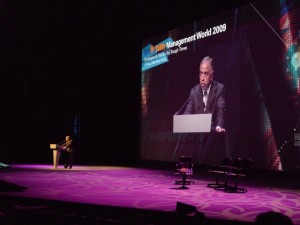 Sanjiv went on to highlight where he saw the biggest opportunities to be, including:

Next up was Rory Sutherland (Ogilvy Group) to provide some light entertainment and a bit of insight with a marketing and advertising angle, and much appreciated it was too. 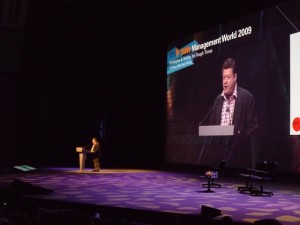 ‘Signs of hope, perhaps’ that mobile marketing has a future, because Rory has changed his opinion. While once he believed people would ‘wait until they got home’ to a more suitable device, like a PC, he now sees mobile revenue being driven by ‘laziness’. Given immediate access to a service, so long as it saves some physical effort, people will be happy to use small fiddlly mobile platforms too complete a task or transaction.

He postulated that mobile services could also benefit service providers simply by their nature as another channel to market. He cited:

Rory  also described a few other was to  repackage customer interaction to generate revenue and customer satisfaction: