They changed it! Forumville, the area for catalyst projects and demos down stairs from the Expo floor, has been redesigned. In previous years there were a whole lot of booths with racks of PCs and screens. Every hour or so two or three groups would get mic’ed-up and try to shout-over the neighboring presentation. TMW have fixed the shouting problem… but on Wednesday, you still couldn’t hear what they were saying….

There’s now two booths with comfy seats and a big projection screen. The marketing-face of the catalyst project gets to present three times during the show (as opposed to three times a day as was usually the case). It’s more relaxed, there’s no hectic technical demo, but there’s also no mic, so you really struggle to hear the presenter unless you sit at the very front. Given the fact that there’s only two booths and they’re at opposite ends of Forumville, why not amplify them? 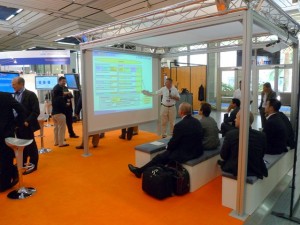 In the middle of Forumville there’s a tidy array of stand-up demo pods where the technical shows are run on demand. Again, no mics, but its intimate enough not to matter so much. It also feels a bit more relaxed; I guess the tech guys prefer the ad-hoc demos to the stage-fright of three scheduled presentations per day. 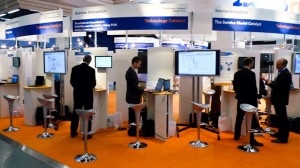 Other than the volume, the re-design is a big improvement. One thumb-up from me.