Last night was par-tay-time at the inaugural CommBat Christmas shin-dig. 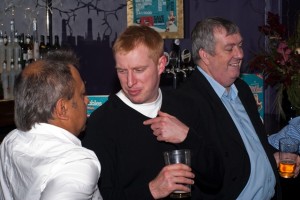 CommBat is an informal group comprising communication professionals living/working in and around Bath (get it? COMMunications BATh?). Conceived by Richard Mishra and Peter Briscoe a couple of months ago, it’s got a LinkedIn presence to go with the clever name.

I must admit I was enthusiastic when I heard about the formation of CommBat. I figured there’d be some opportunity for me to do talks, show lots of PowerPoint slides, argue about interface specifications… But turns out there’s not much emphasis on that. It’s predominantly social and a bit networky. 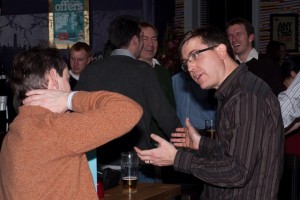 Indeed, that was very much the vibe last night. With the inevitably large proportion of current and ex-CrAmdocs folk (and their partners) turning up, it had the atmosphere of a reunion. Once a few drinks had been drunk, there was plenty of opportunity to network: Many ex-Cramerites are still in the OSS industry. I spotted people (often pretty senior in their respective OSS divisions)  from: 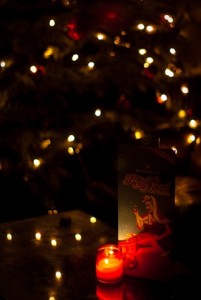 Hats-off to Richard and Pete for organizing it. I was lucky enough to have a great office party the day before too (big week!), but with social budgets shrinking and partners rarely getting an invite any more, it was great to have an inclusive event with old-friends.

Search for the CommBat LinkedIn group, sign up, and come along to the next event.

More pictures of the night at the CommBat Flickr group.