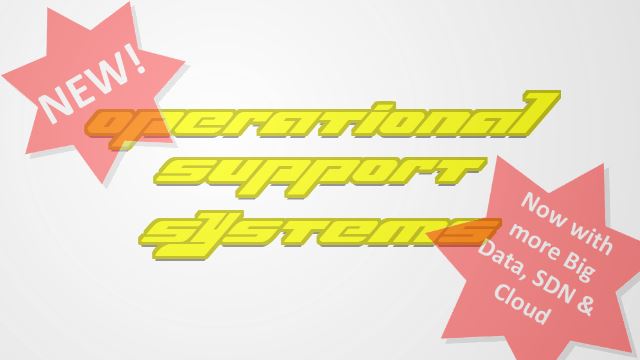 Big Data, SDN,  Cloud: All the buzzwords that seem to generate the most excitement in the world of communications today. What two things do they all have in common? They’re all re-brands of well established ideas, and they’re all too sexy to be seen with OSS.

This struck me when writing on the CSP Data blog about TM Forums Big Data InFocus event. The message from the usual OSS/BSS vendors is, hey, we can do Big Data too. Well, I haven’t seen any Map Reduce for Inventory product releases, but that’s not the point. OSS/BSS is all about the data and process, so naturally there’s great opportunity to deliver analytics. We are starting to see more of that now.

The problem is that Big Data, SDN, and Cloud all grew up outside of telco. They’re from the campus, the corporate data centre, the enterprise IT vendors.  The nexus of innovation, excitement and the culture to change things is not in the traditional OSS/BSS vendors, nor the telcos for that matter.

Some have argued that not being ‘bogged down’ in telco is the secret to the apparent success of these technologies. Yes, we’ve seen attempts at essentially the same concepts as Big Data, SDN and Cloud before: Data warehouses;  IEEE 802.1Q; Application Service Providers. And many more examples from history…

Some of these innovations died a death. Some were successful but limited, by economics or complexity, to only the largest corporate users. I will hazard a guess that none of these techs are backed by young, well funded, Californian-based start-ups.

The telco industry doesn’t create stuff like SDN. It creates stuff like IMS. Starting from the position that networks are really complicated and the telcos’ all have uniquely complex requirements, a horrendously complex technology is devised with everyone’s input before it goes in to a standards-approval process over several years. The result is something that is ultimately ignored by the suppliers and the wider market.

Now, I’m not saying OSS suffers quite so baldly from this affliction of complexity. There’s been a lot of innovation in OSS over the last 15 years. But, boy, does it need a kick up the arse now to generate some innovation for the next 15 years.

Maybe it’s the marketer in me saying this. Maybe that kick up the arse is a rebrand. A new image for OSS. A strong statement about how it’s going to lead the success of Big Data, SDN, and Cloud for CSPs.

OSS, and its vendors, are having a bit of a crisis of identity right now.

In the past OSS embraced and thrived on changes in communication technology. In the 90s networks were run using a few monolithic OSS products and a lot of bespoke software built on whatever was the IT flavour of the day. Then, the operational demands of DSL, IP and 3G led to new products and a healthy, growing OSS industry.

Big Data, SDN and Cloud is all happening somewhere else. Unless we know what OSS is for in this new world, and can clearly articulate that to its users, we risk CSP’s operations being dominated by a mish-mash of of generic enterprise IT tools and a fewincumbent OSS dinosaurs.